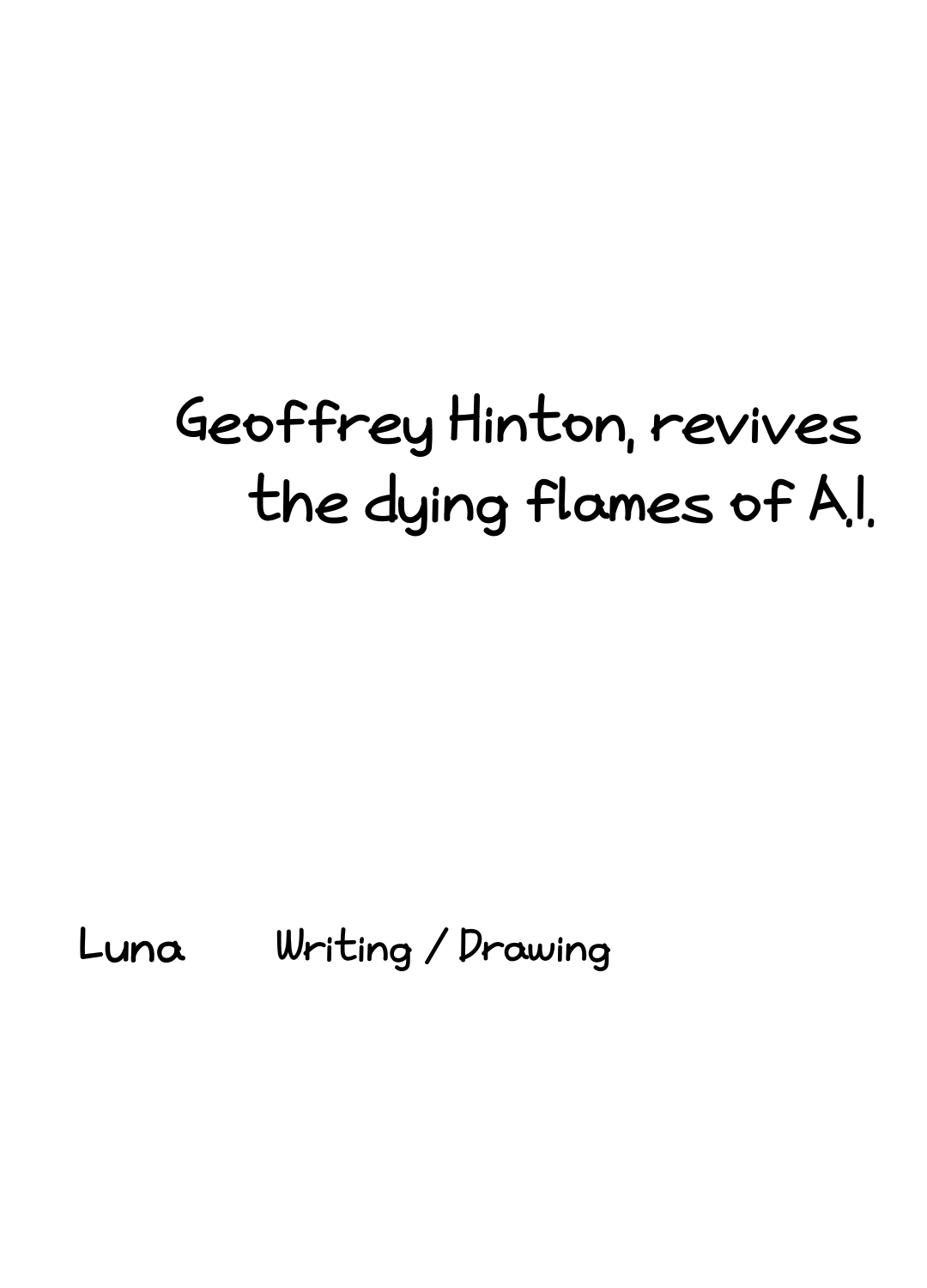 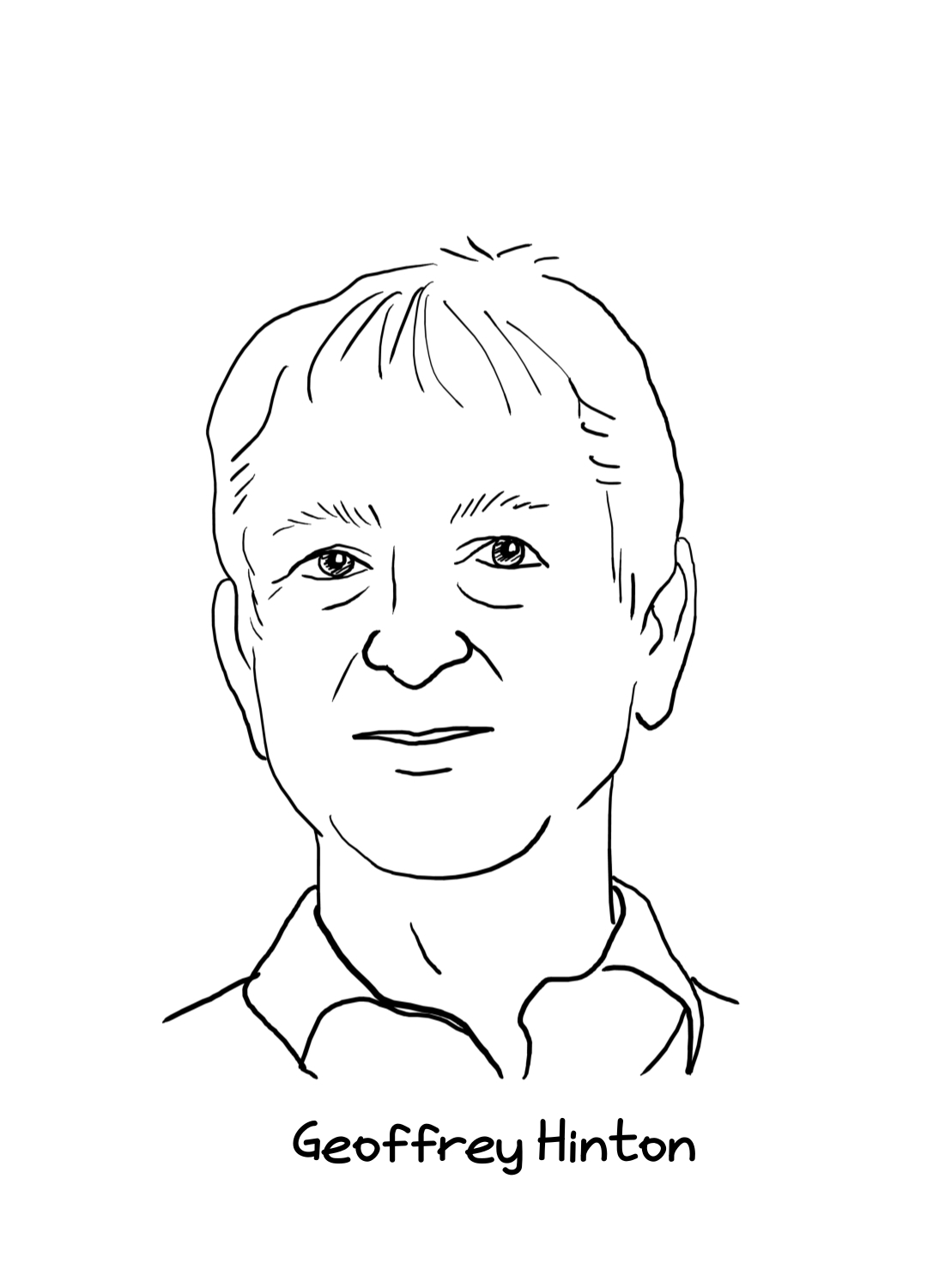 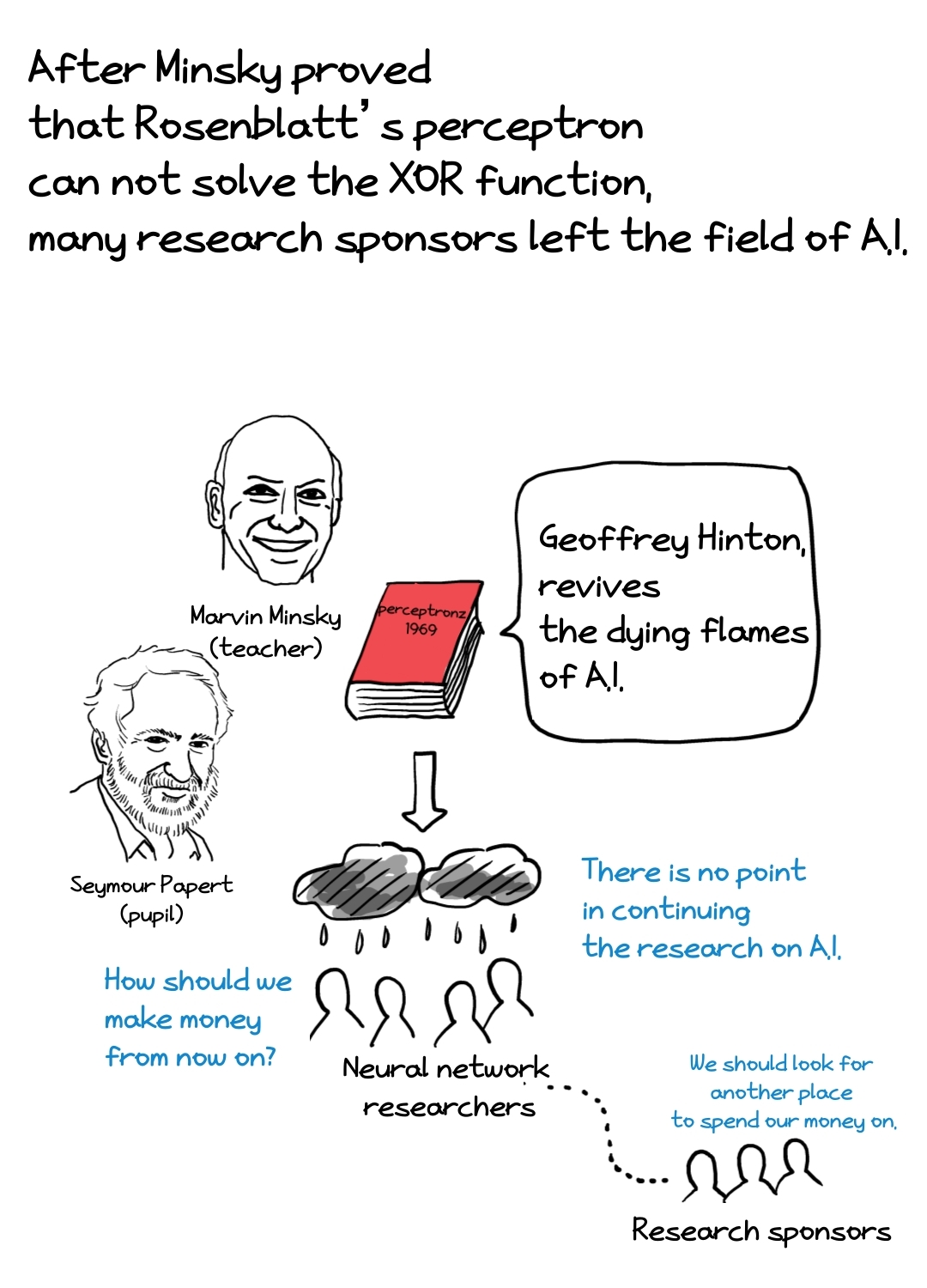 After Minsky proved
that Rosenblatt’s perceptron can not solve the XOR function,
many research sponsors left the field of A.I. 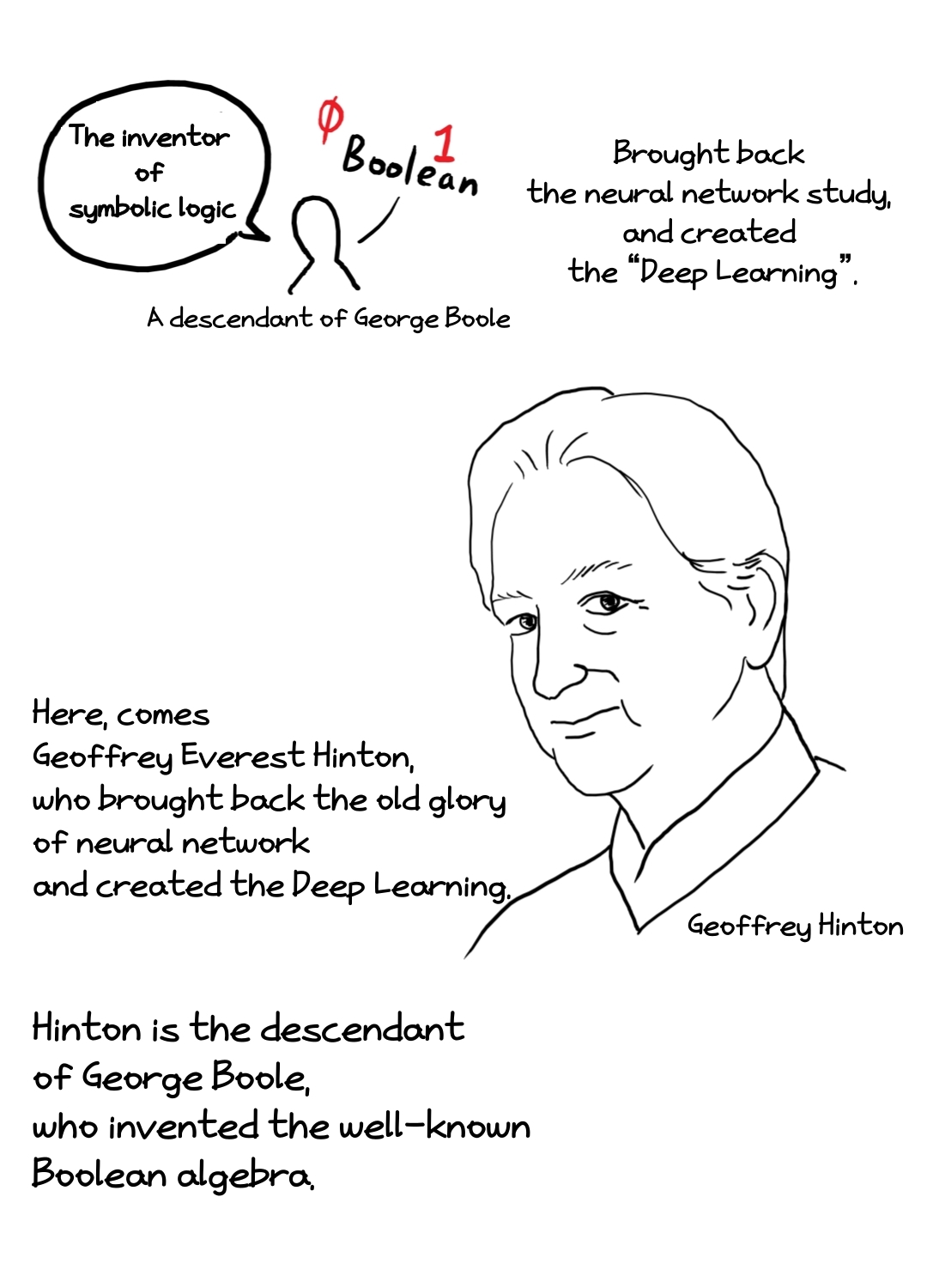 Here, comes Geoffrey Everest Hinton,
who brought back the old glory of neural network
and created the Deep Learning.

Hinton is the descendant of George Boole,
who invented the well-known Boolean algebra. 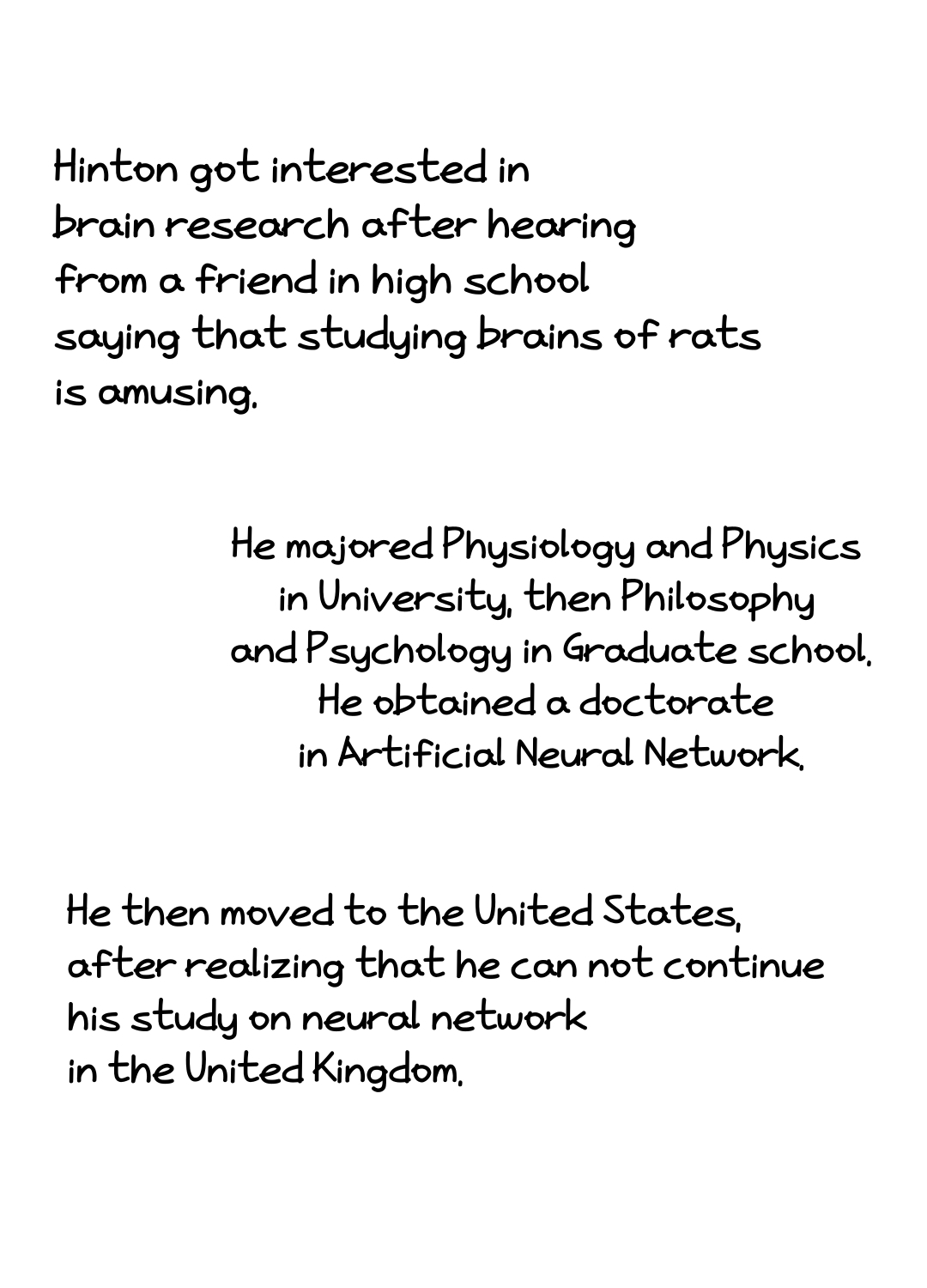 Hinton got interested in brain research
after hearing from a friend in high school saying
that studying brains of rats is amusing.

He majored Physiology and Physics in University,
then Philosophy and Psychology in Graduate school.
He obtained a doctorate in Artificial Neural Network.

He then moved to the United States,
after realizing that he can not continue his study
on neural network in the United Kingdom. 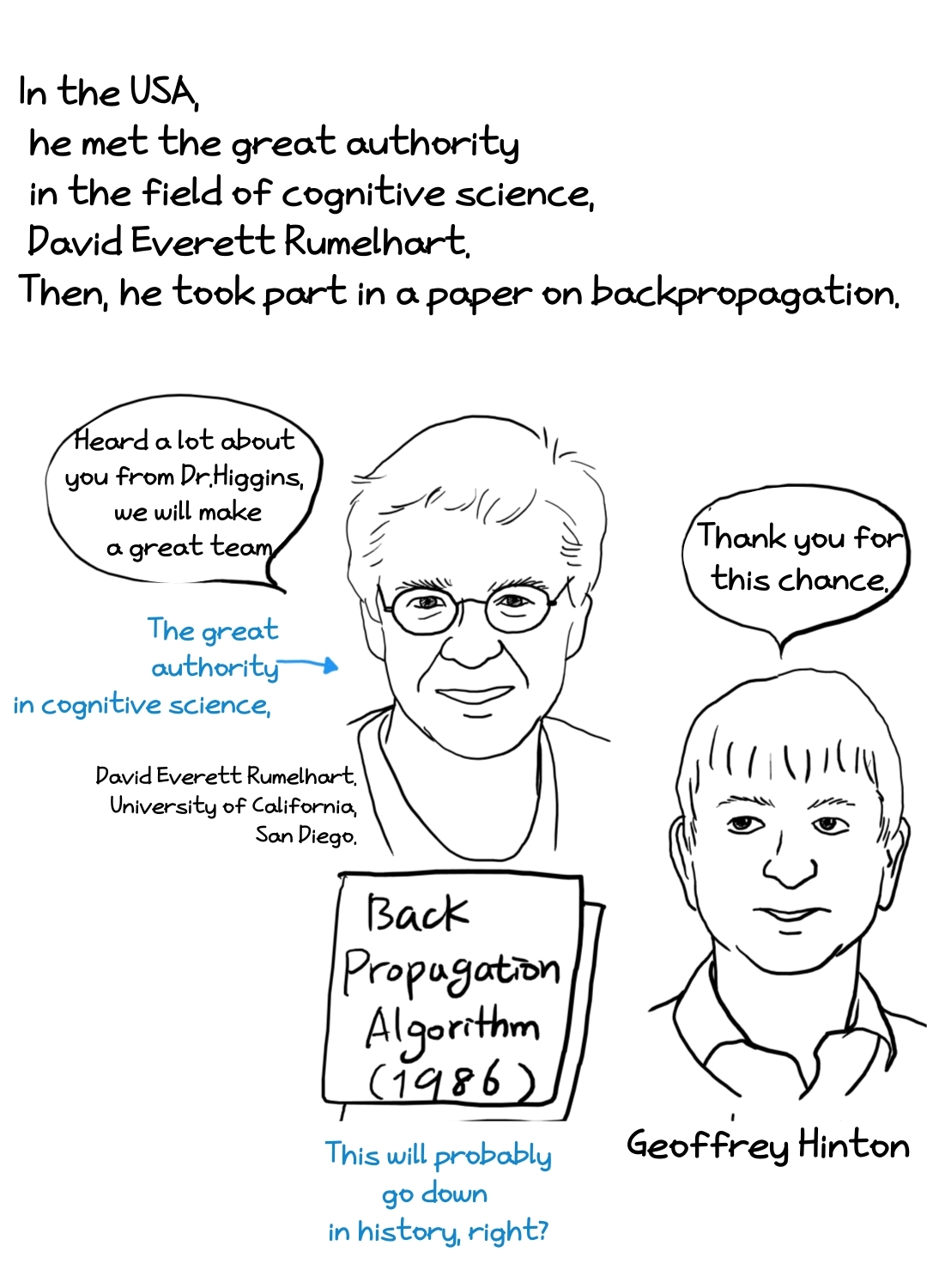 In the USA, he met the great authority
in the field of cognitive science, David Everett Rumelhart.

Then, he took part in a paper on backpropagation. 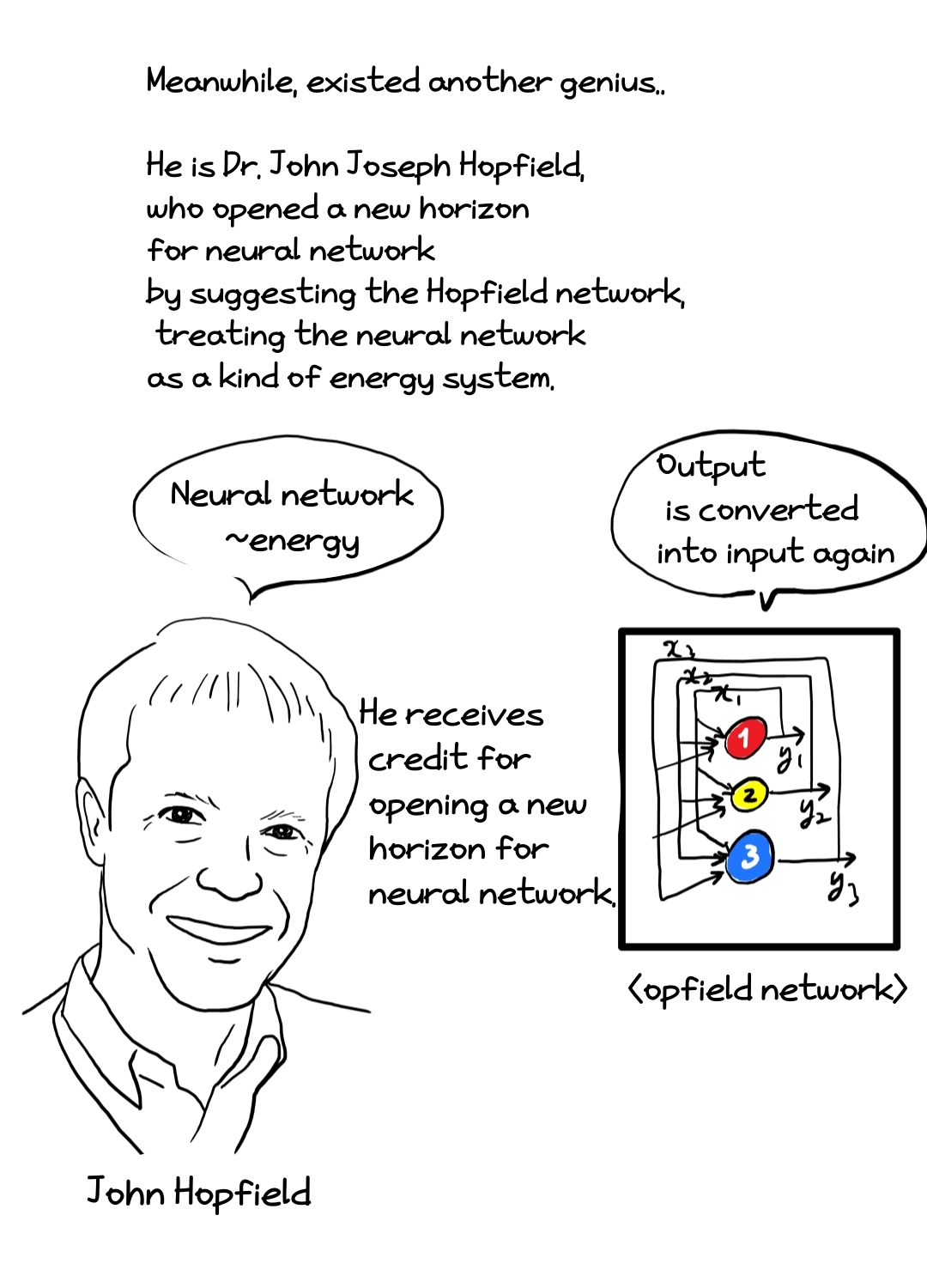 Meanwhile, existed another genius..
He is Dr. John Joseph Hopfield,
who opened a new horizon for neural network
by suggesting the Hopfield network,
treating the neural network as a kind of energy system.

He receives credit for opening a new horizon for neural network. 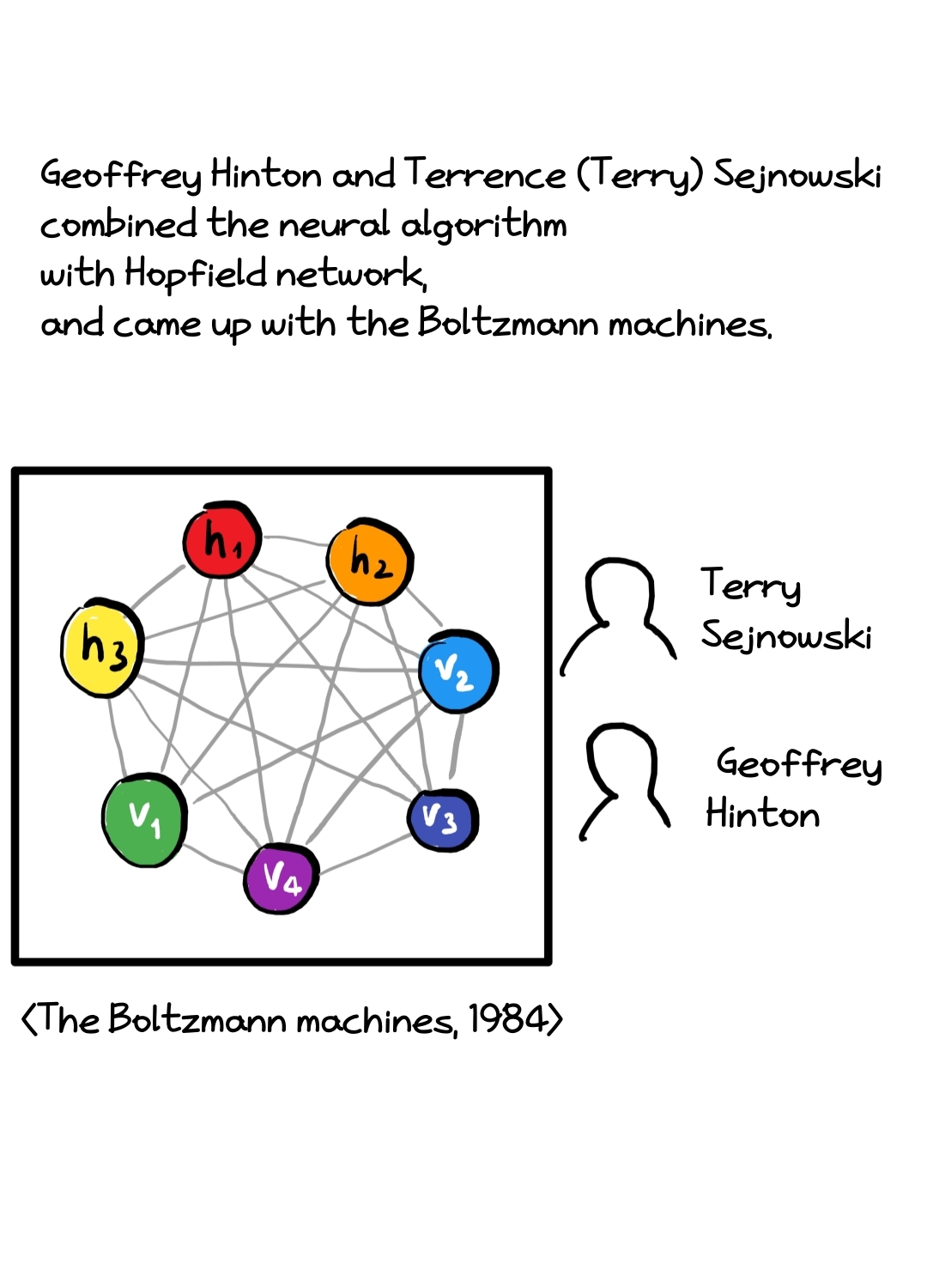 Geoffrey Hinton and Terrence (Terry) Sejnowski
combined the neural algorithm with Hopfield network,
and came up with the Boltzmann machines. 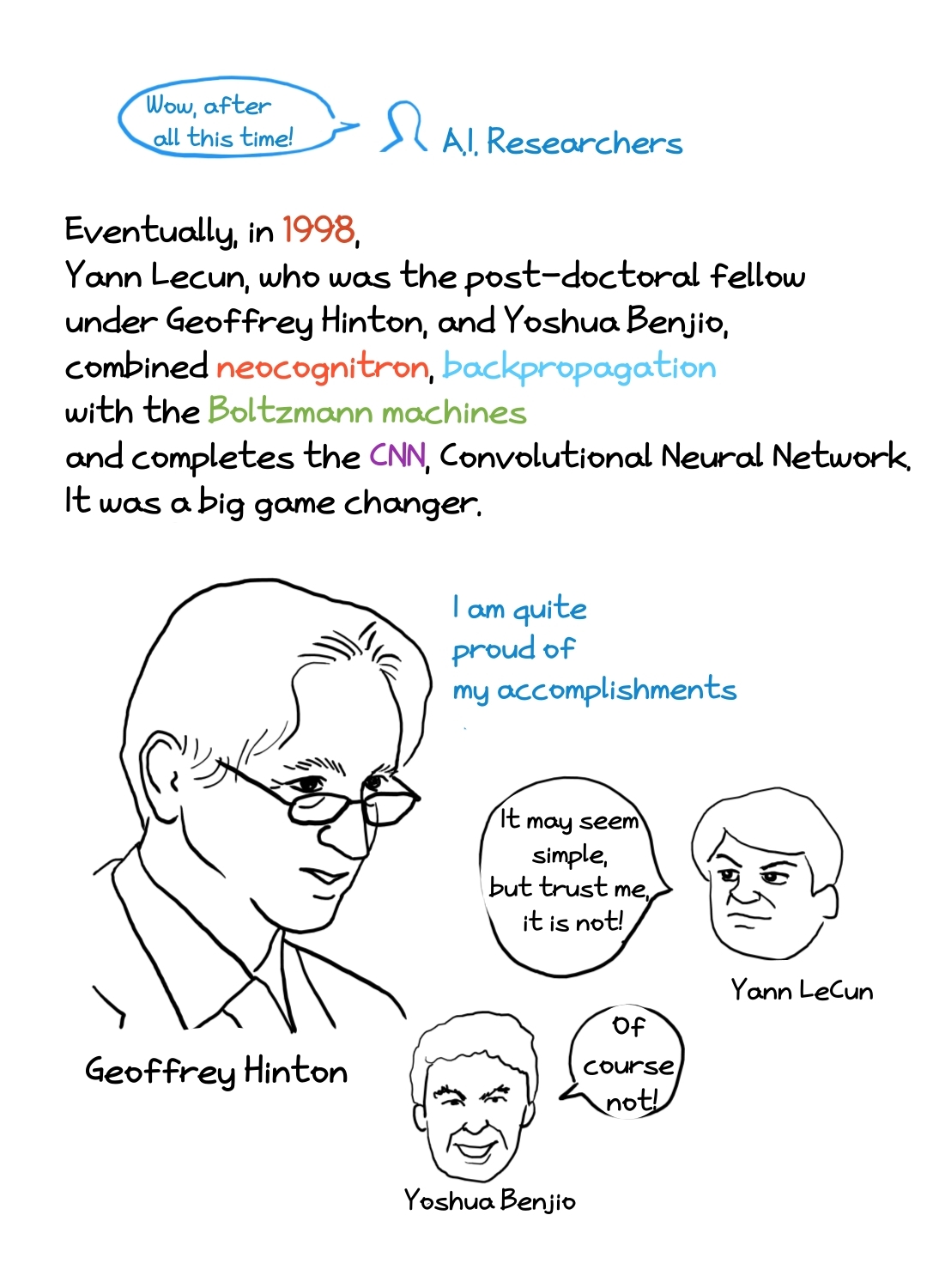 Eventually, in 1998, Yann Lecun,
who was the post-doctoral fellow under Geoffrey Hinton,
and Yoshua Benjio, combined backpropagation
with the Boltzmann machines and completes the CNN,
Convolutional Neural Network.

It was a big game changer. 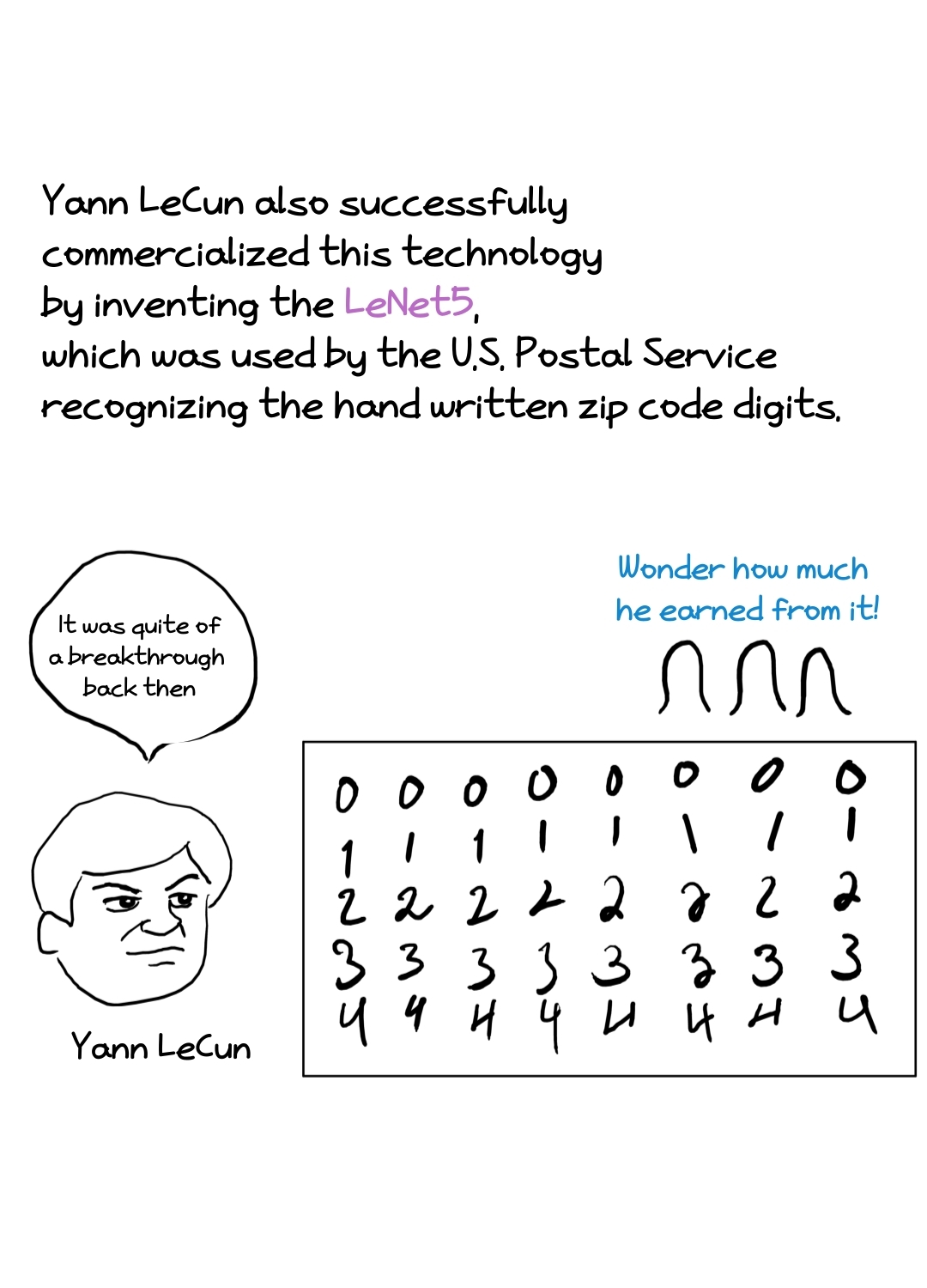 Yann LeCun also successfully commercialized
this technology by inventing the LeNet5,
which was used by the U.S. Postal Service recognizing
the hand written zip code digits. 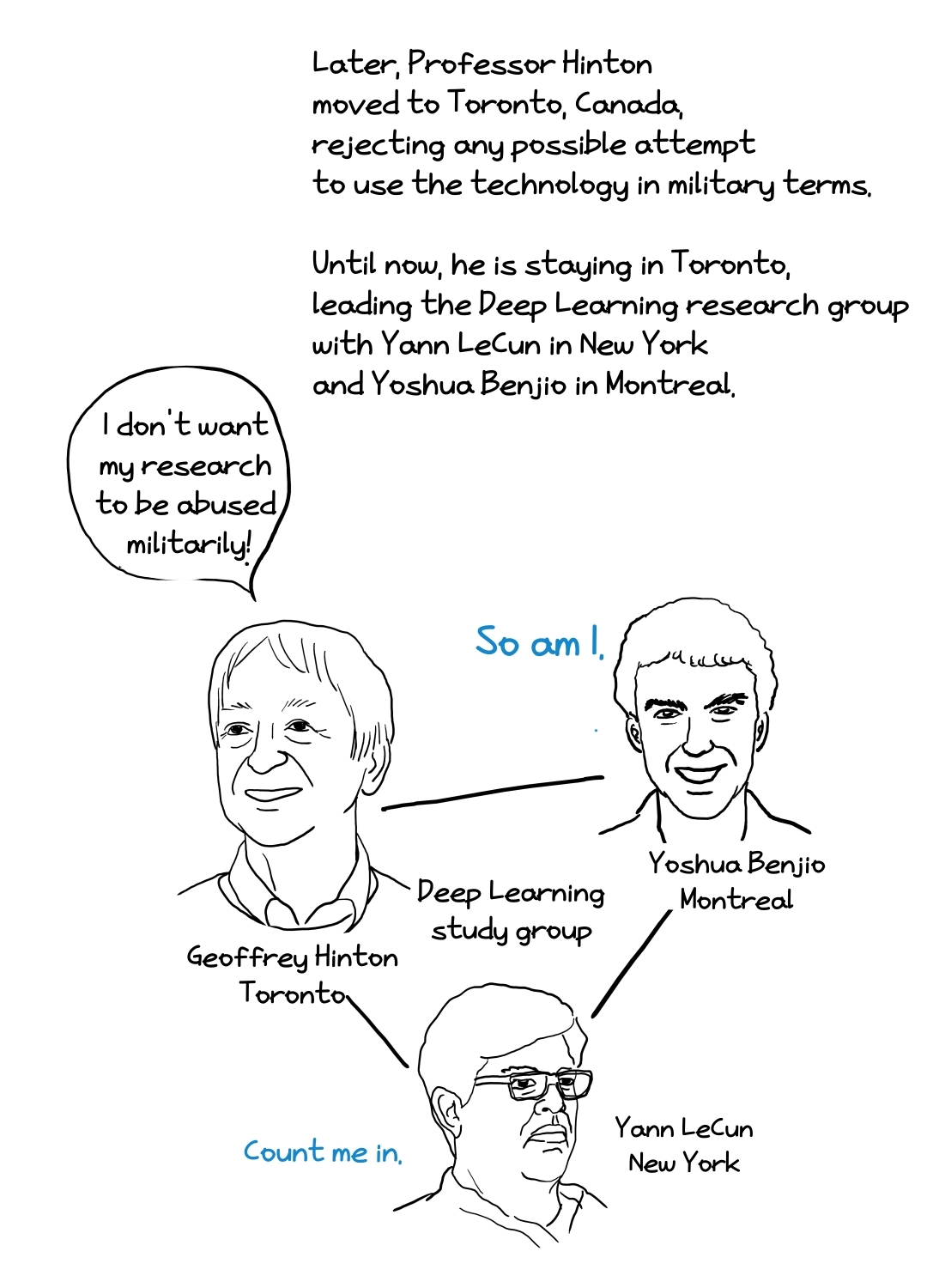 Later, Professor Hinton moved to Toronto, Canada,
rejecting any possible attempt to use the technology in military terms.

Until now, he is staying in Toronto,
leading the Deep Learning research group
with Yann LeCun in New York and Yoshua Benjio in Montreal.
Do you need database performance monitoring? Contact us and we will send you a free quote
[email protected]