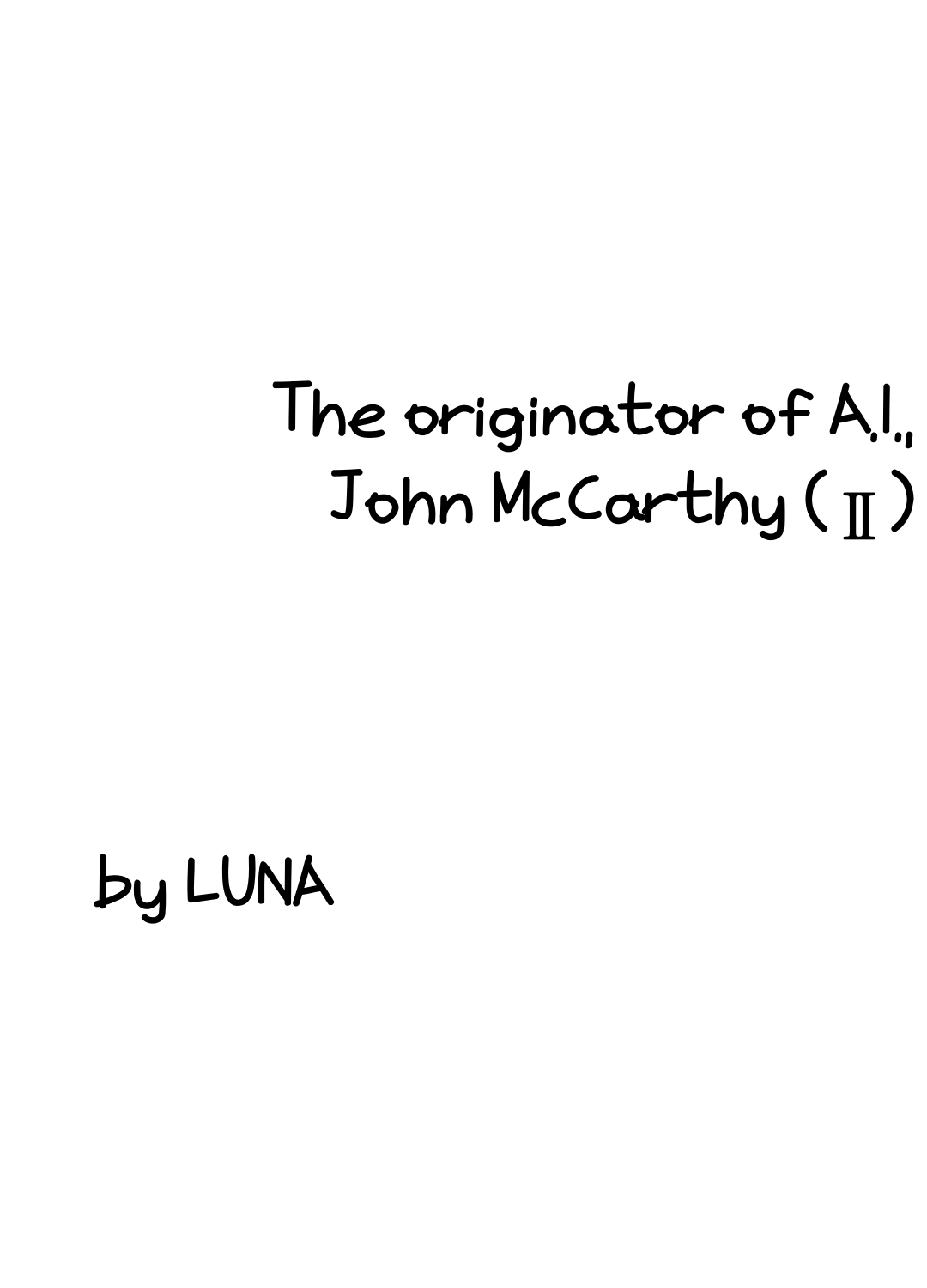 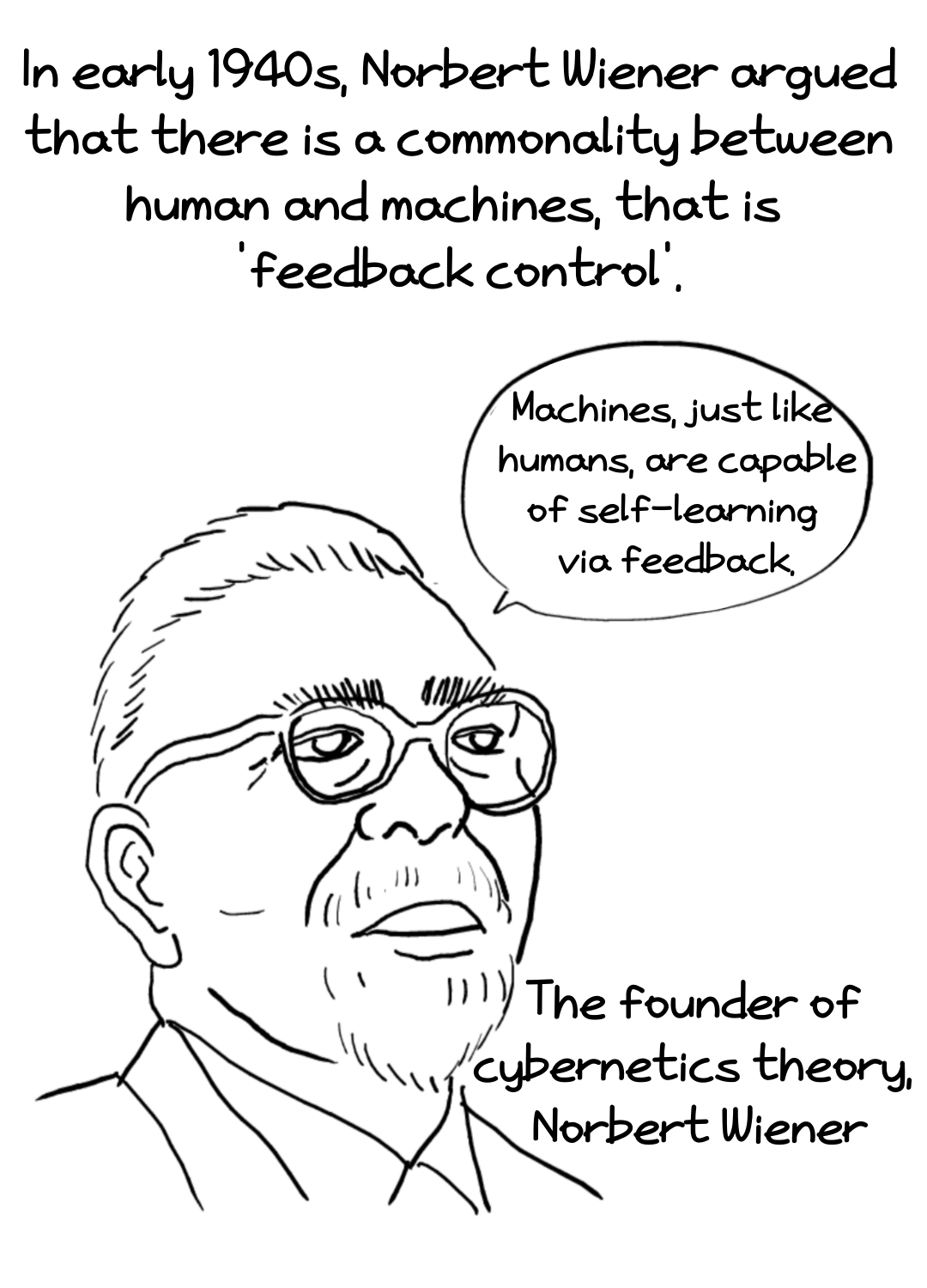 In early 1940s, Nobert Wiener argued that there is a commonality between human and machines, that is 'feedback control'. 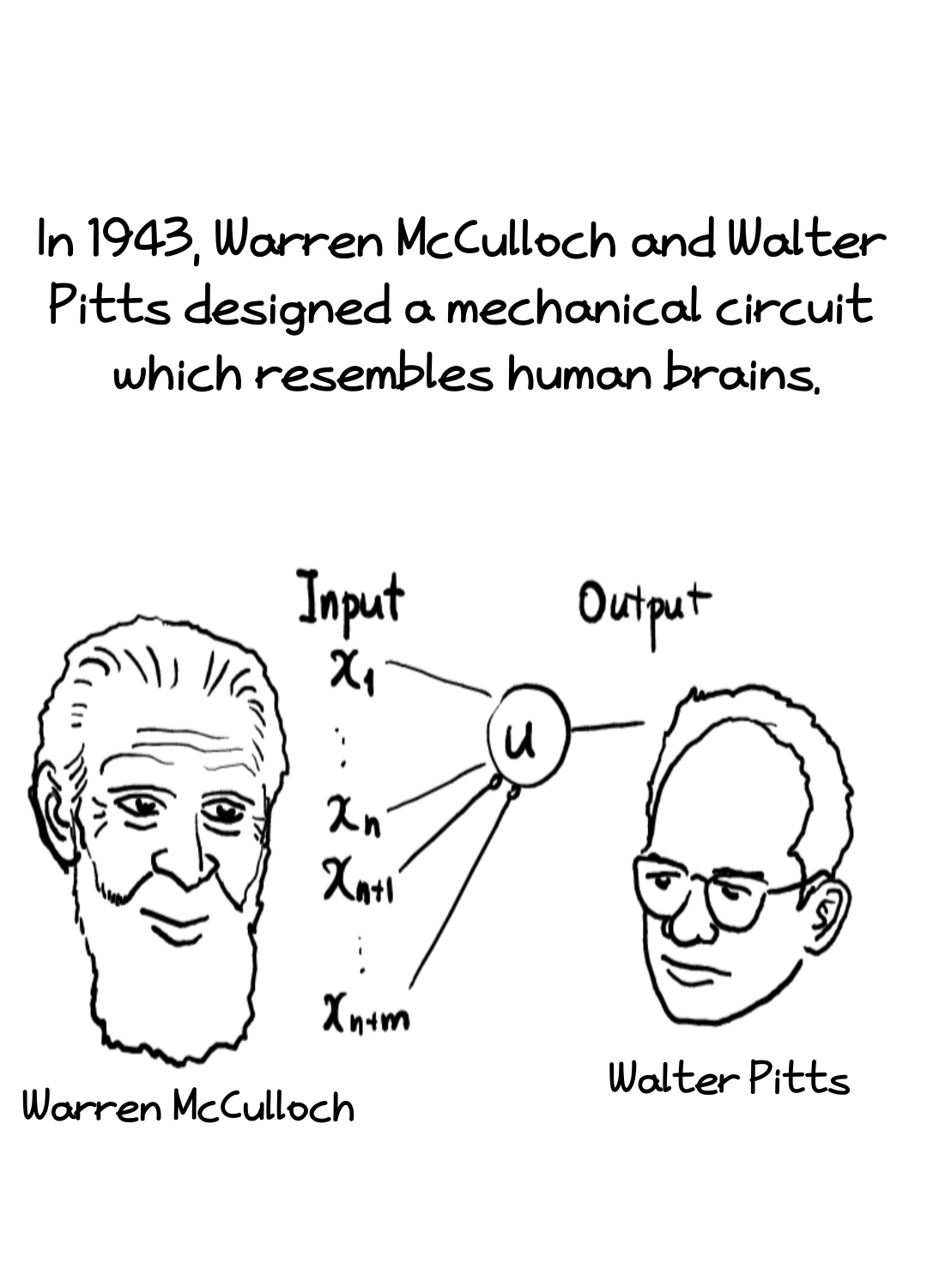 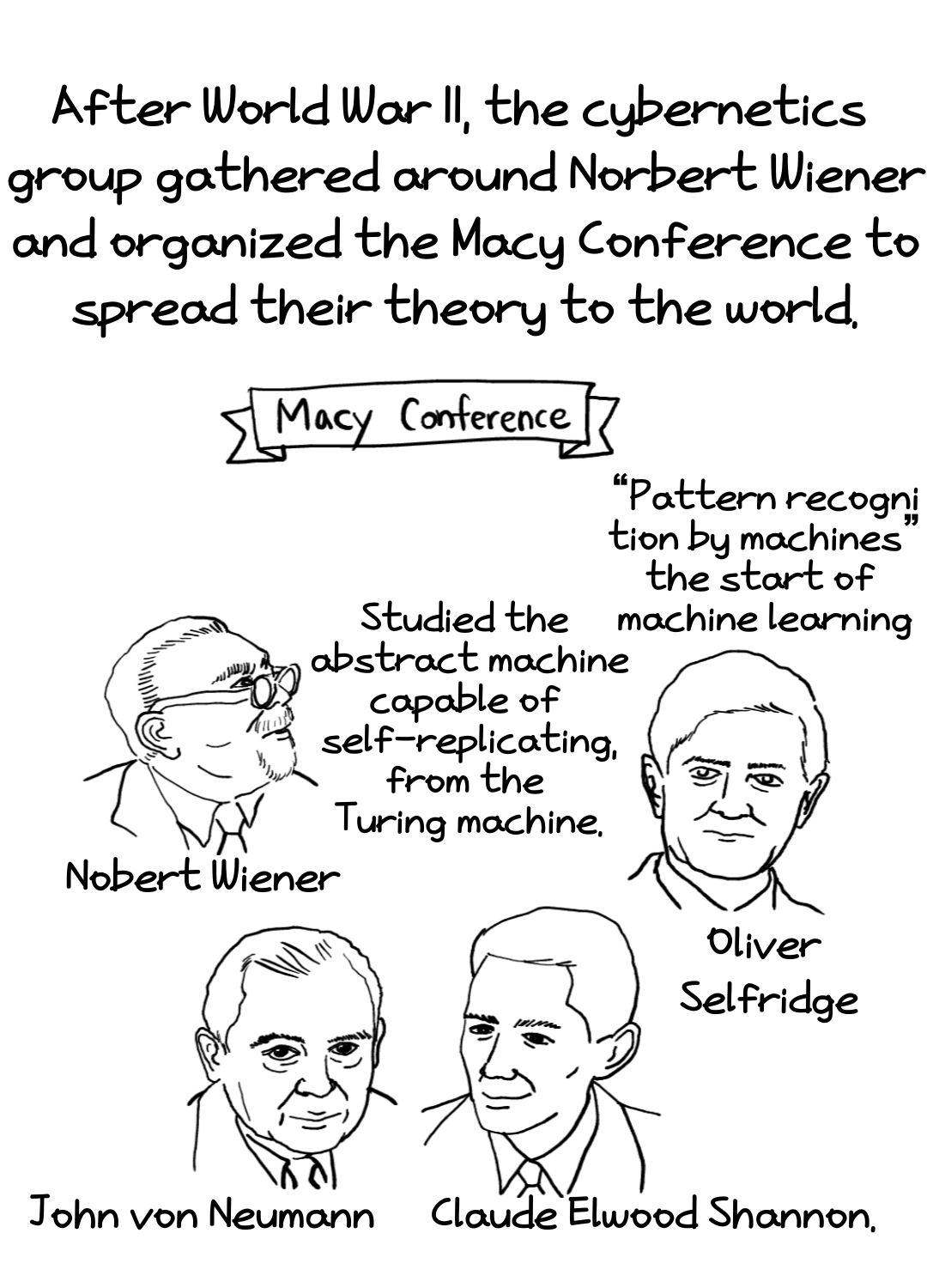 After World WarⅡ, the cybernetics group gathered around Norbert Wiener and organized the Macy Conference
to spread that theory to the world. 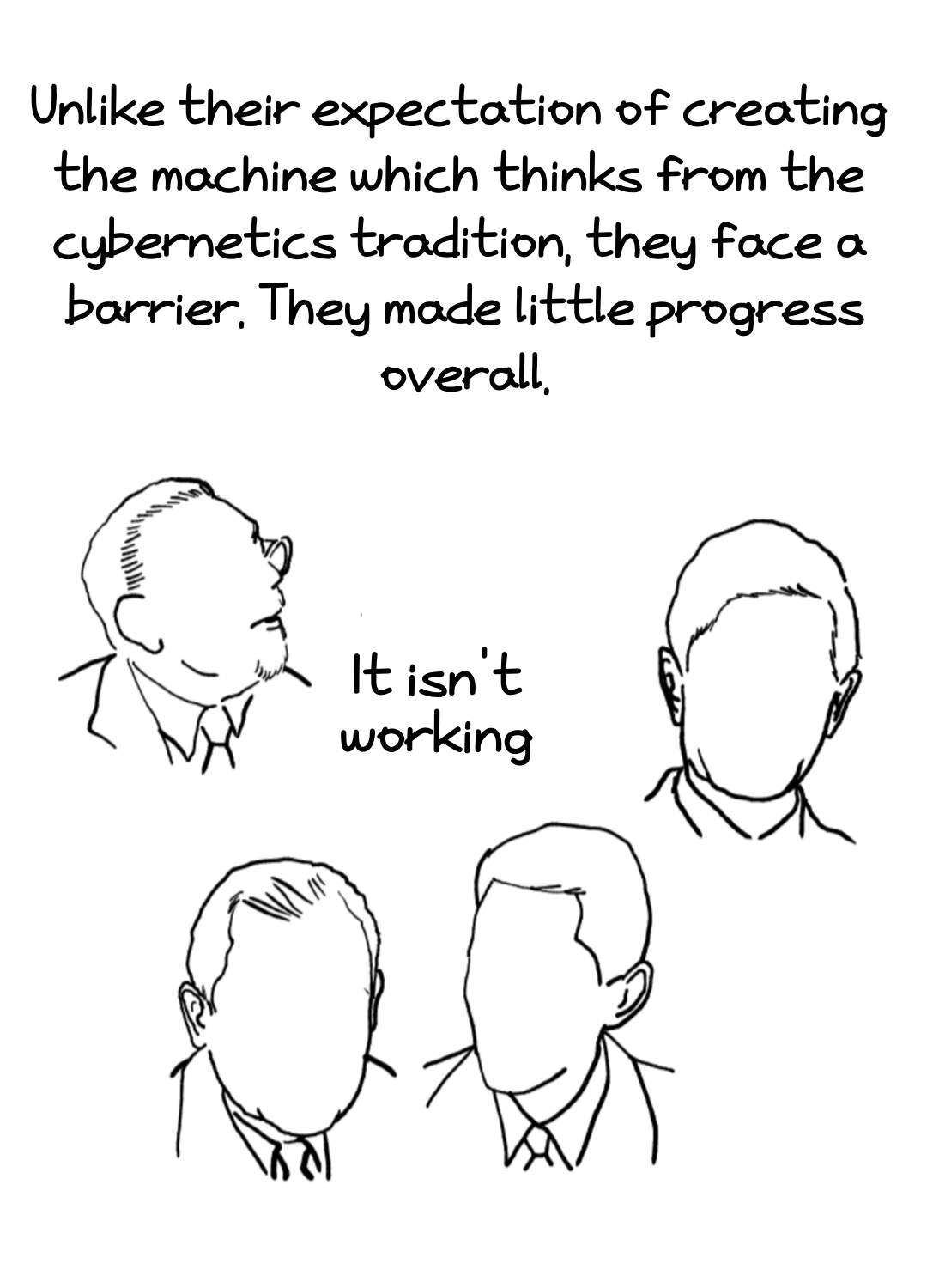 Unlike their expectation of creating the machine which thinks from the cybernetics tradition, they face a  barrier.
They made little progress overall. 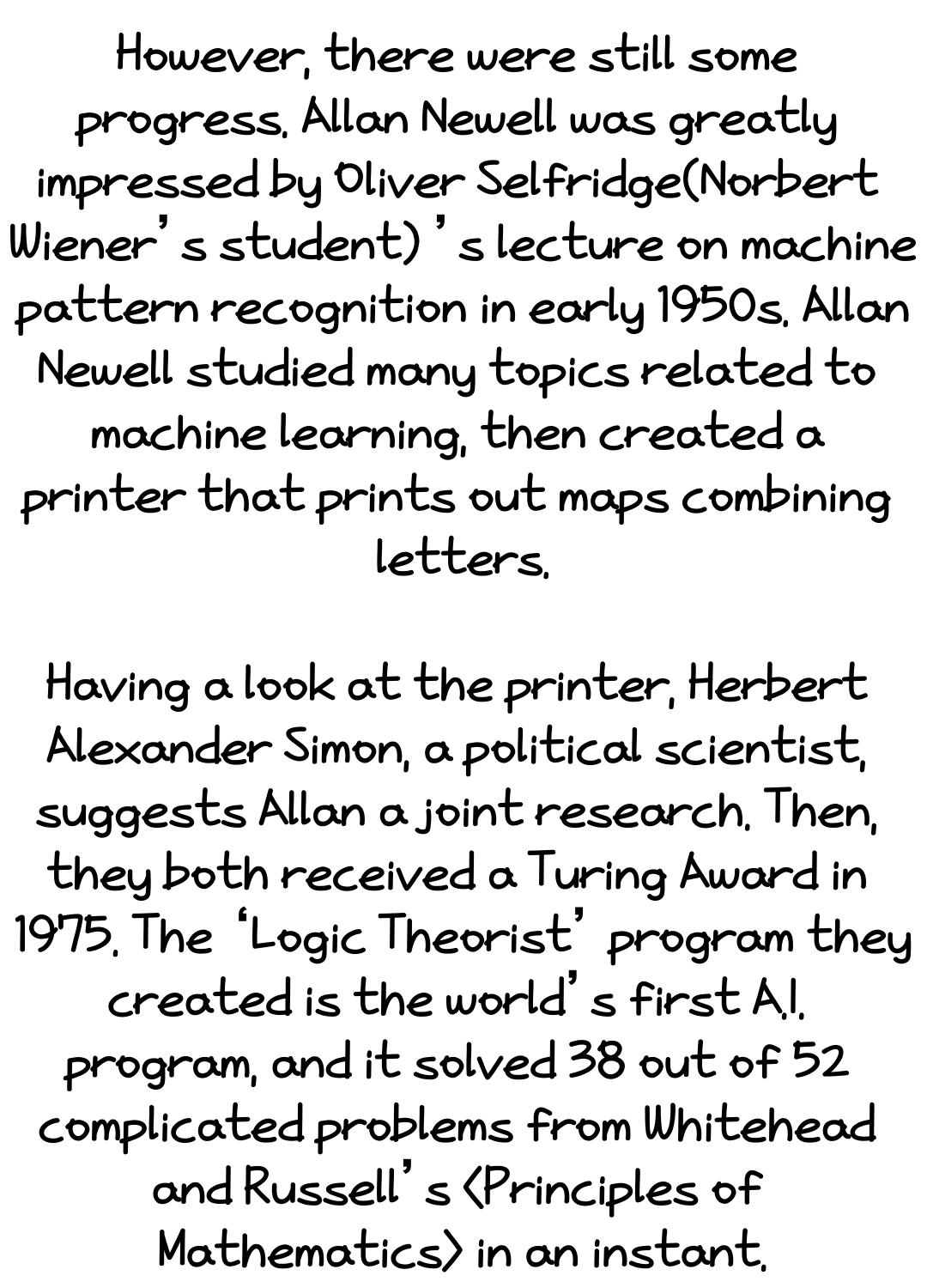 However, there were still some progress. Allan Newell was greatly impressed by Oliver Selfridge
(Norbert Wiener’s student) ’s lecture on machine pattern recognition in early 1950s.
Allan Newell studied many topics related to machine learning, then created a printer that prints out maps combining letters.
Having a look at the printer, Herbert Alexander Simon, a political scientist, suggests Allan a joint research.
Then, they both received a Turing Award in 1975. The ‘Logic Theorist’ program they created is the world’s first A.I. program,
and it solved 38 out of 52 complicated problems from Whitehead and Russell’s 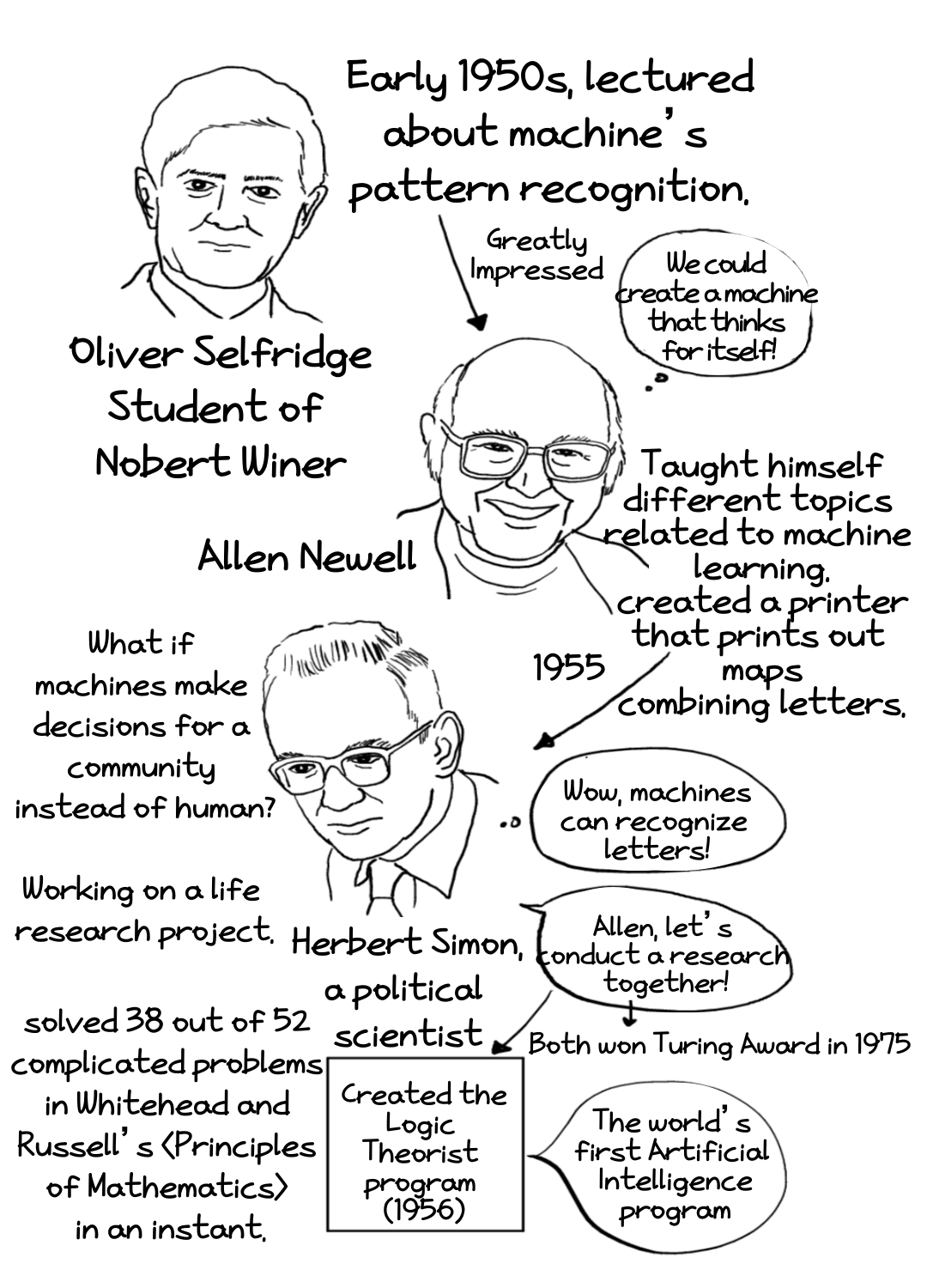 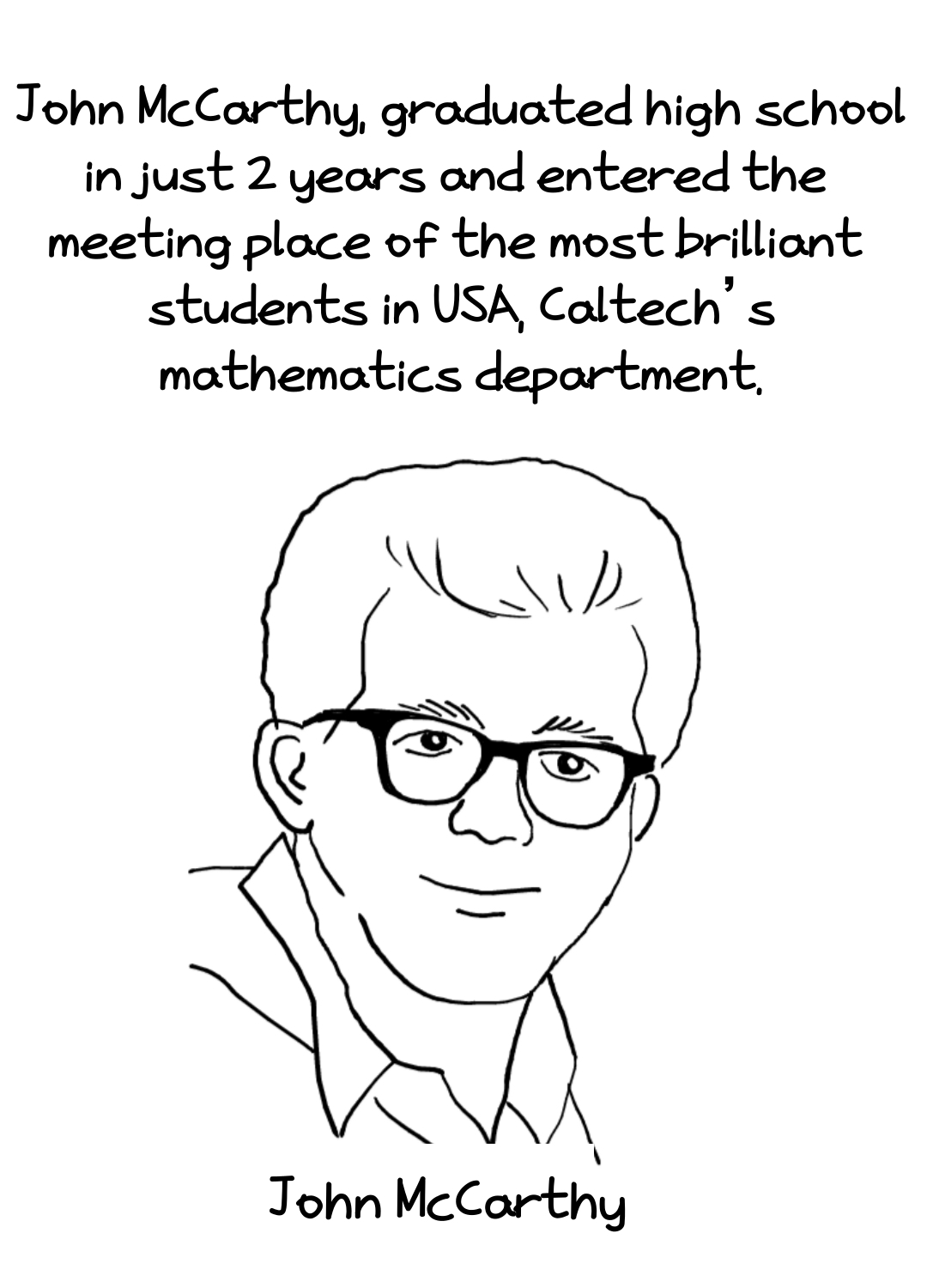 John McCarthy, graduated high school in just 2 years and entered the meeting place of the most brilliant students in USA,
Caltech’s mathematics department. 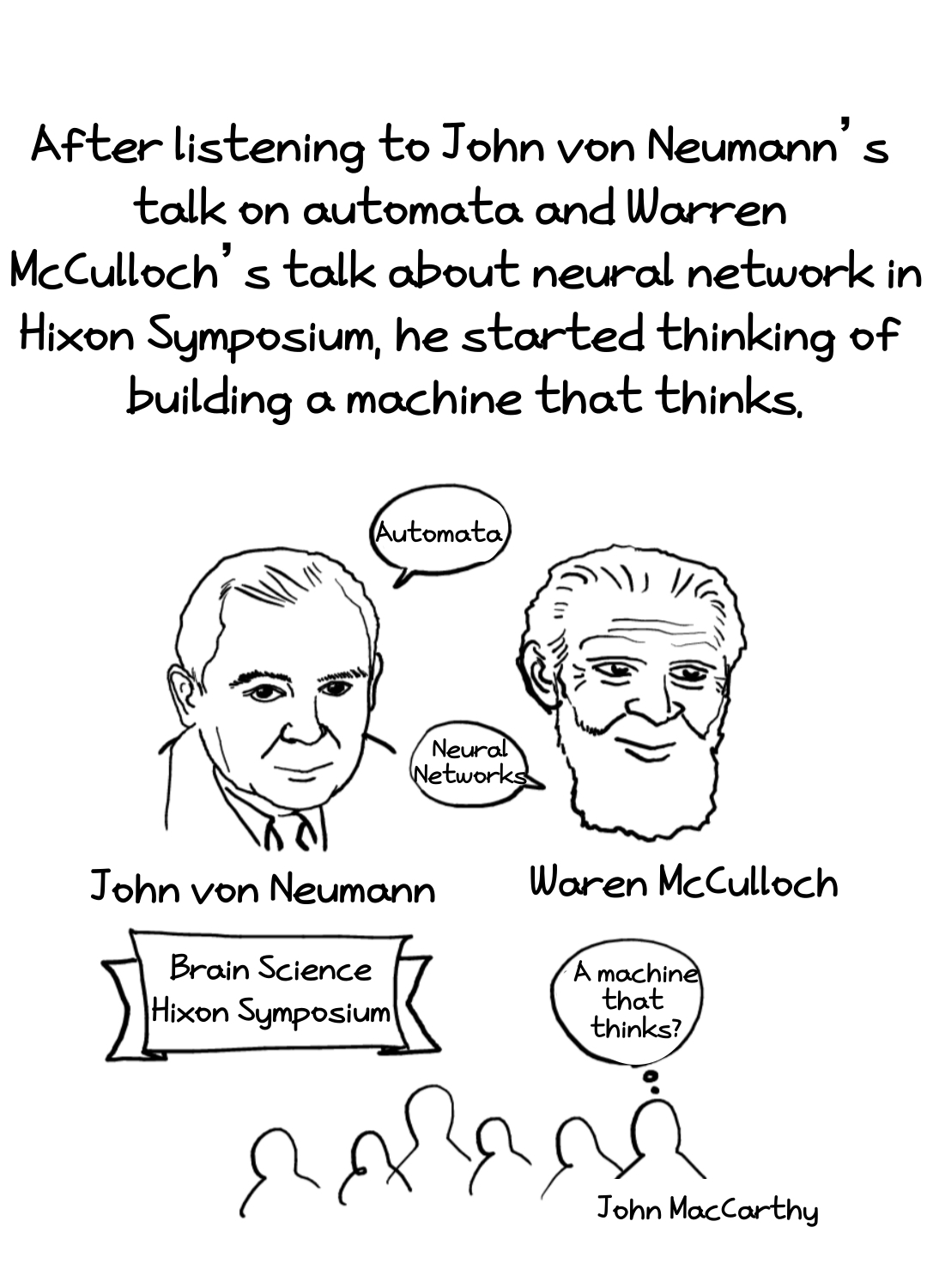 After listening to John von Neumann’s talk on automata and Warren McCulloch’s talk about neural network in Hixon Symposium,
he started thinking of building a machine that thinks. 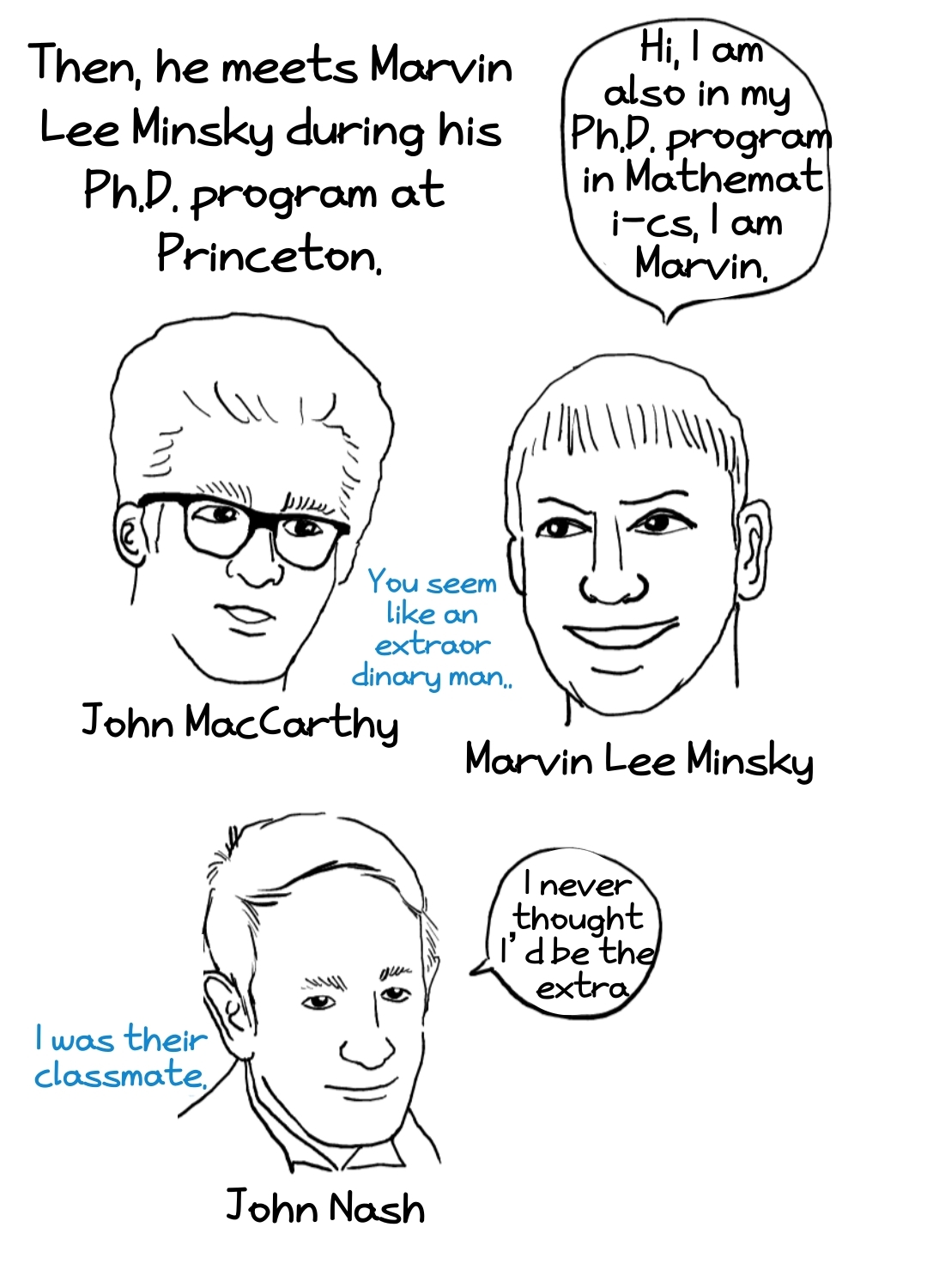 Then, he meets Marvin Lee Minsky during his Ph.D. program at Princeton. 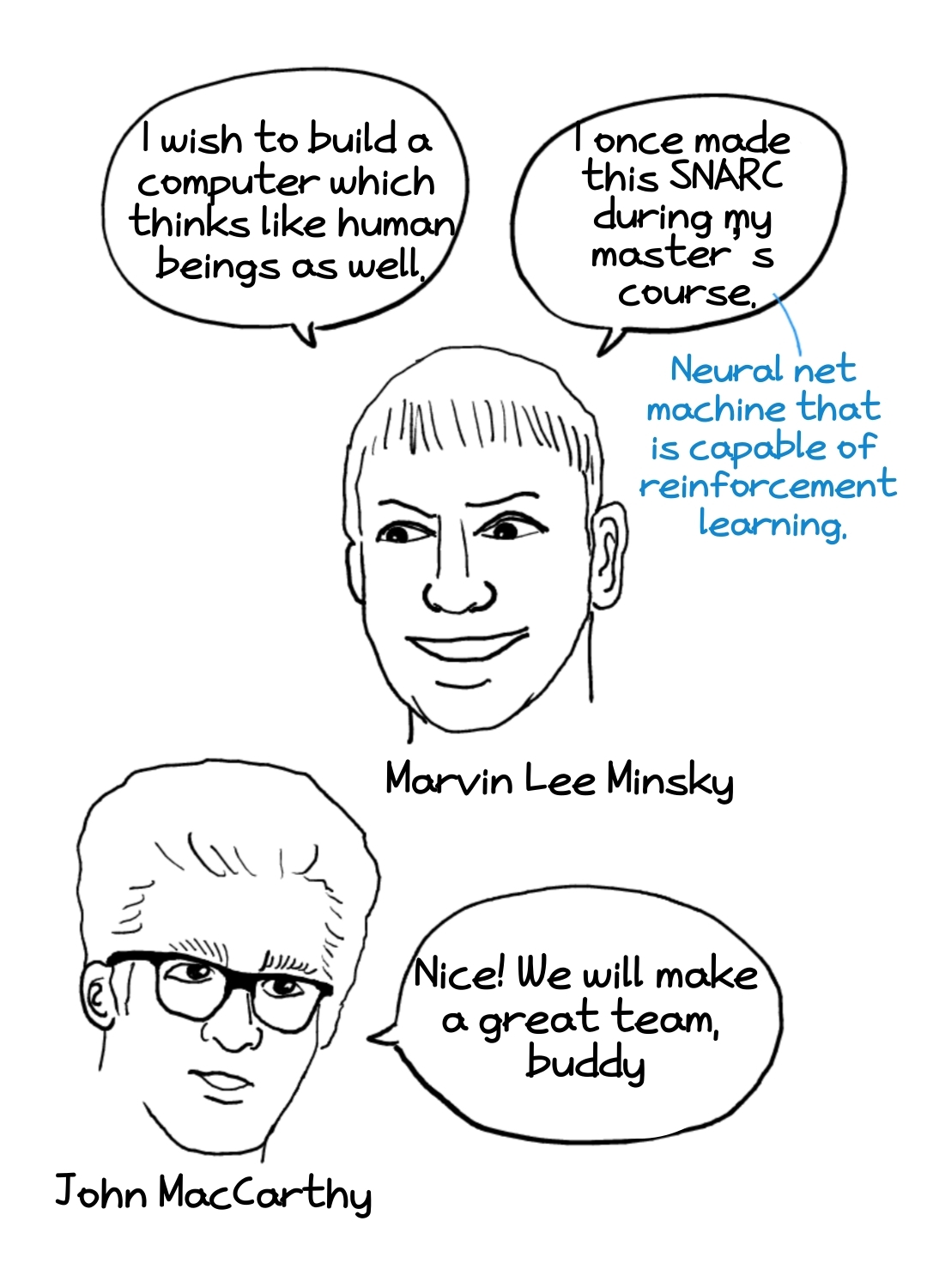 Marvin Minsky wanted to build a computer that thinks like a human.
During his maser’s course, he created the SNARC, which is a neural net machine that is capable of reinforcement learning.
In mutual understanding, Marvin Lee Minsky and John McCarthy started their joint research. 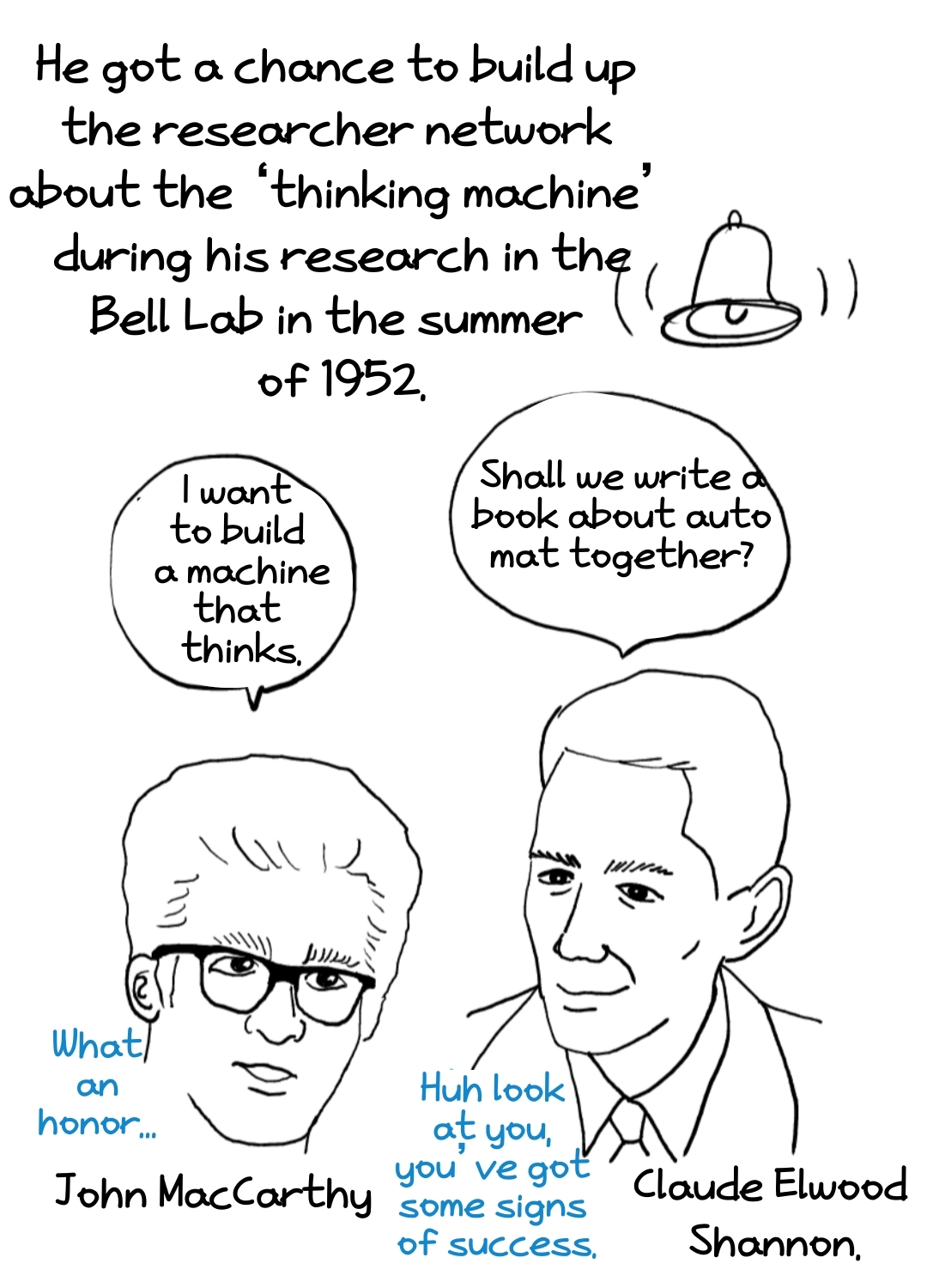 He got a chance to build up the researcher network about the ‘thinking machine’ during his research in the Bell Lab in the summer of 1952. 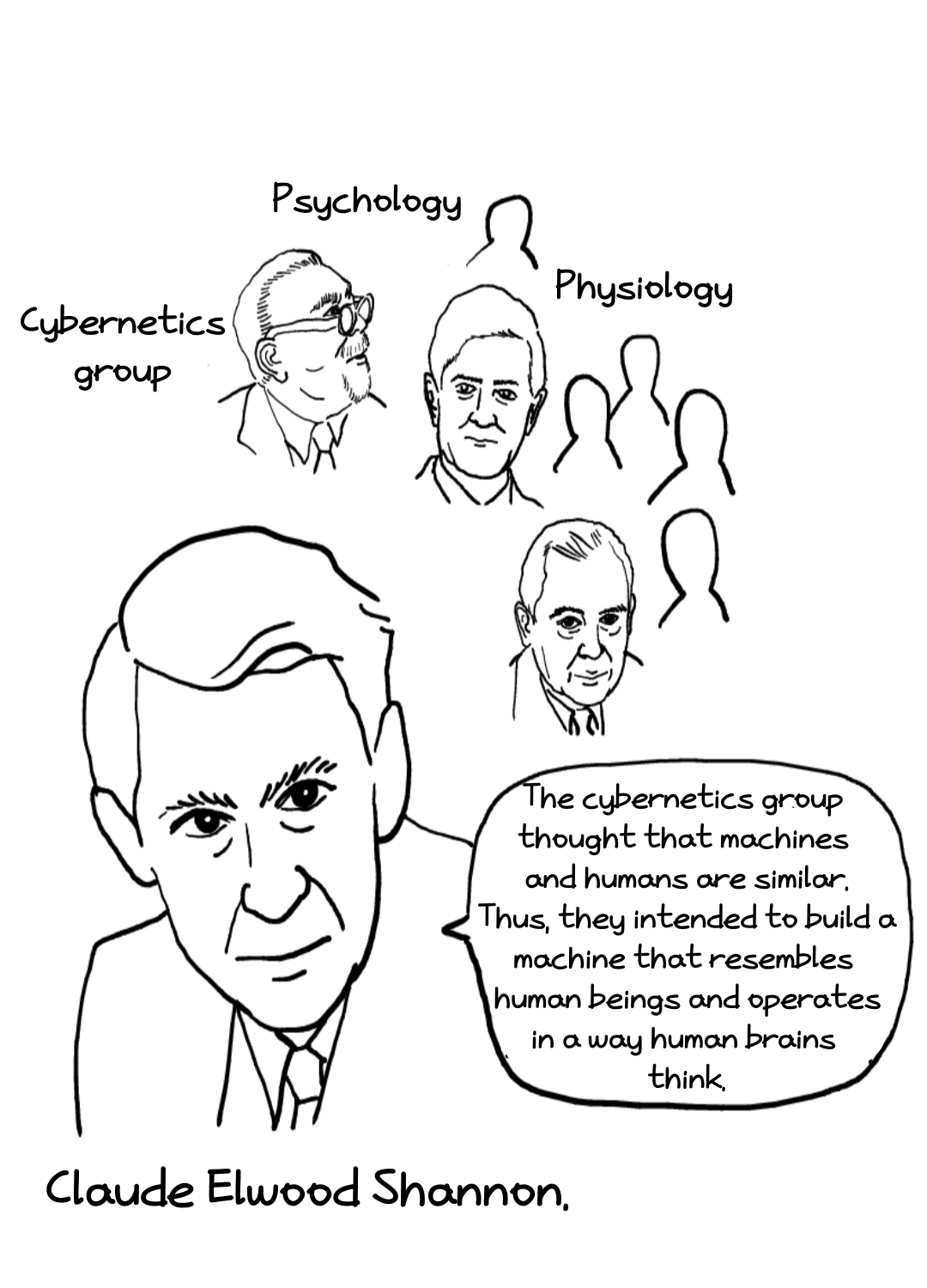 The cybernetics group thought that machines and humans are similar.
Thus, they intended to build a machine that resembles human beings and operates in a way human brains think.
However, it did not work well. 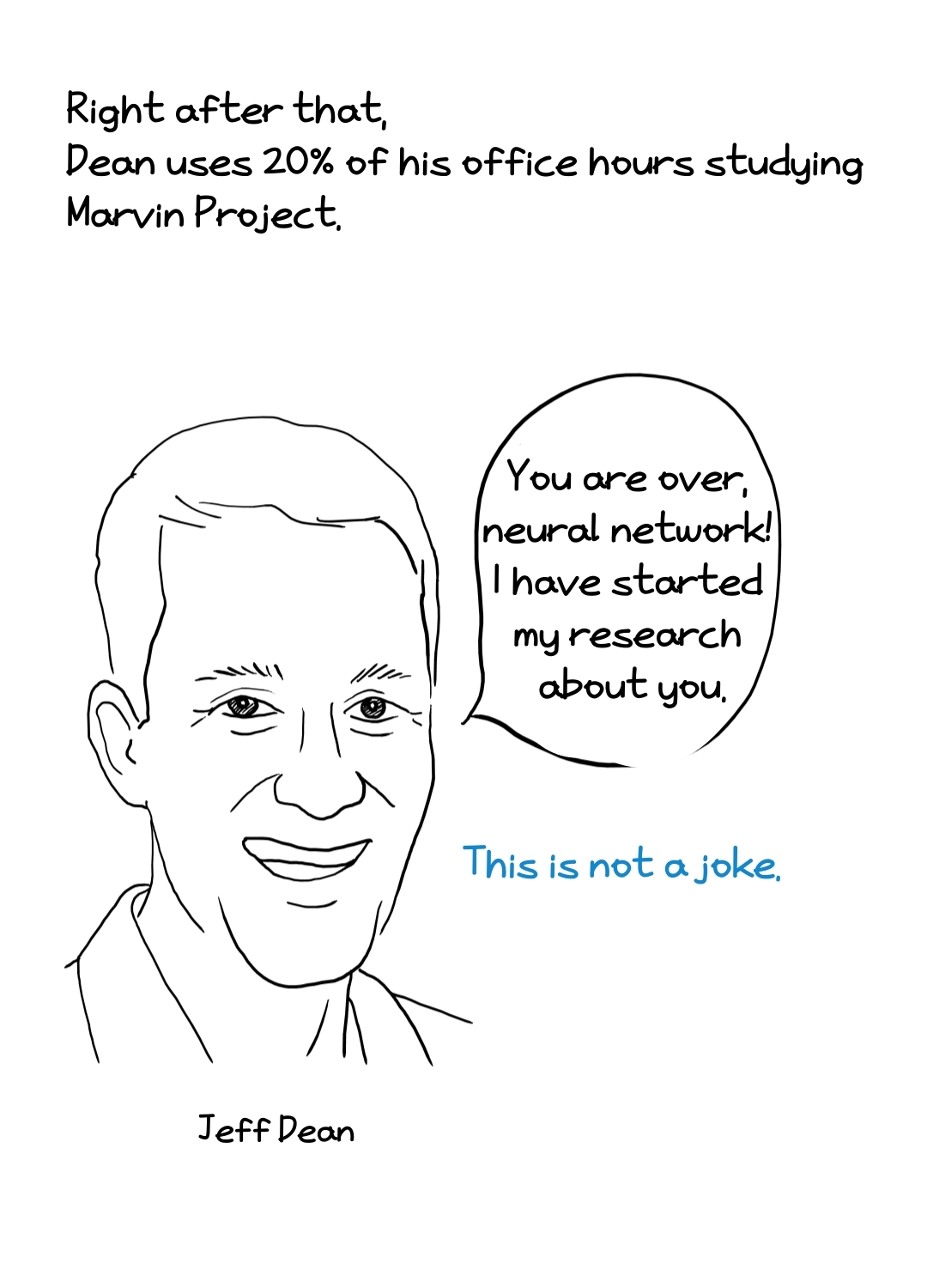 McCarthy, thinks differently. This kind of insight opened the era of A.I. (more specifically, symbolic A.I.) beyond cybernetics.
Do you need database performance monitoring? Contact us and we will send you a free quote
[email protected]